This interview took place in the front room of our little shotgun home in the French Quarter.  Laura Maxine Fairbanks, Laura to her friends and Maxie to family receives her middle name from my mother Maxine Peters Norris Juban.

Maxie interviewed me for a StoryCorp.me project.

Last Saturday, January 9, 2016, I held my first official book signing with Down in New Orleans: True Stories of a Fabled City at the French Market gift shop A Tisket A Tasket located at 910 Decatur St. in New Orleans.  Lisa Jones, Business Manager, was a great help in meeting the public.  This was my first experience promoting my book directly to the public.  Lisa’s advice was to simply explain why the book is special.  Pique their interest, pull them in, get them excited about reading the book.

The simple summary I shared is that the book reveals significant personalities who  helped create the character of the city over the past three hundred years. Many are widely known, but there are a lot of new faces in this book: Madeline Hachard who wrote the first book about New Orleans om 1727; Jean Louis, boat builder, who endowed a hospital that grew into the benchmark healthcare system for the population, Charity Hospital; Juan St. Malo, an African seeking freedom; Nicholas Roosevelt and his wife Lydia Latrobe Roosevelt who brought the first steamboat to the city and numerous others.

Hearing my summary led some folks to ask insightful questions about the book or New Orleans or myself.  One young lady asked if the French Market looked like this 100 years ago.  Telling her that from where we stood aromas from famous Madam Begue’s kitchen would be swirling by.  We would hear people speaking German, Creole French, Spanish and languages from around the world.  Then passing us would be mules pulling carts of vegetables, flowers, fish and game from the farms, fields and waters that surround New Orleans.  All from the place we were standing.  That young lady bought the first  book of the day.

It was a great afternoon and I owe great thanks to Lisa and A Tisket A Tasket.  She’s planning another event for February.

DOWN IN NEW ORLEANS: True Stories of a Fabled City

Inspired by years of storytelling, meeting people and enjoying their questions, I decided to write a book of the stories. That came to life on Kindle and Amazon in December of 2015.  DOWN IN NEW ORLEANS: True Stories of a Fabled City gives a visitor, resident or tour guide down to earth stories that represent the history, character and flavor of an enchanted city. I approach the history from the viewpoint of a raconteur, a storyteller. History is theories of what happened, detailed accounts, conclusions, footnotes and bibliographies. DOWN IN NEW ORLEANS tells the stories.

It’s available on Kindle and Amazon. 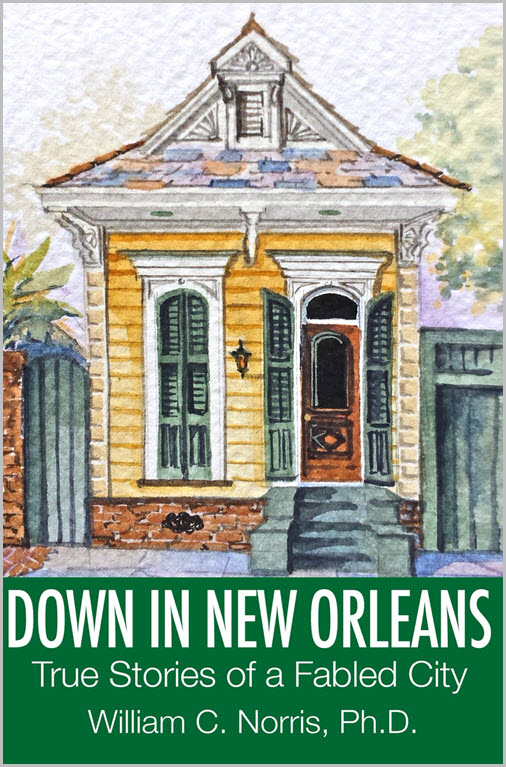 Read a few pages of Down in New Orleans

Read a few pages of Down in New Orleans